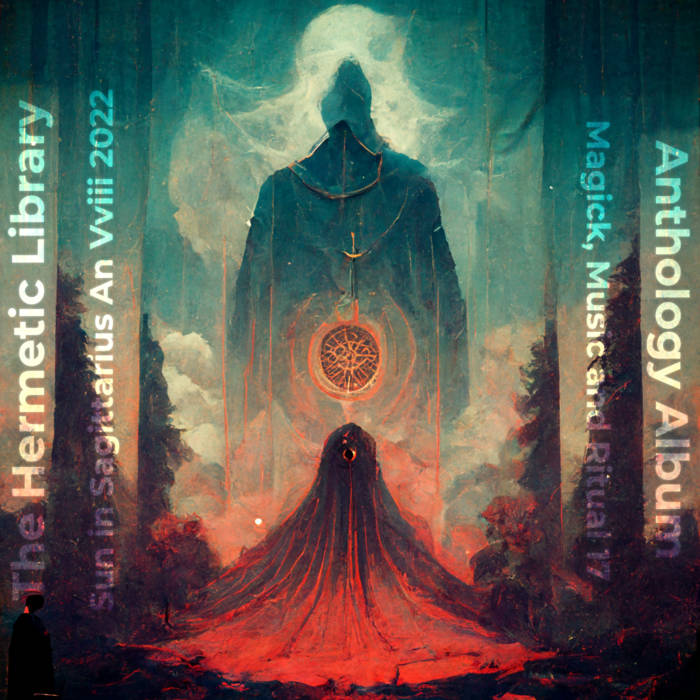 Magick, Music and Ritual 17, the anthology album release for 2022 from the Anthology Project, is being released for anniversary of the December 3, 1996 birthday of the Hermetic Library, with a playlist of 11 tracks by 11 artists, new and returning voices, for this Hermetic Library Anthology Album.

The cover includes art created by the Librarian, using the MidJourney machine learning image generation tool, for this current year in the Thelemic Calendar, An V:viii (2022 e.v.), which represents the docosade of Atu V, the Hierophant and the year of Atu VIII, Adjustment. We also have a total of three alternative covers, included with the album download at Bandcamp, that features additional artwork. There are also three other bonus downloads: PDFs for “The Great Work”, “Quotes, Quips, and Whimsical Conundrums”, and “Inspired from Within” by SD Master.

The best way to add this anthology, as well as previous releases and future Hermetic Library albums, to your personal music collection is through the Patron campaign at Patreon. New Patrons receive a gratis download code for a previous anthology release of their choice in addition to all the other patronage rewards they may receive. Consider becoming a Patron today!

The Hermetic Library at Hermetic.com has an overall vision of Archiving, Engaging and Encouraging the living Western Esoteric Tradition, Hermeticism, Aleister Crowley’s Thelema, and more through Open Access Occultism for over 25 years.

I started the benefit anthology project to help promote newer works in the Esoteric Tradition to the audience of the Hermetic Library and beyond. The anthology project also further raises awareness about the corpus and culture of magick and ritual.

I encourage you to check out the Hermetic Library at Hermetic.com, if you aren’t already familiar with it, as that’s the reason this project exists and may also offer inspiration to you. The site was started in 1996 and has ever since consistently been an extremely popular resource for students and researchers interested in the Esoteric Tradition.